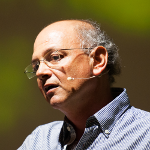 Roberto Natalini (roberto.natalini@cnr.it) got his Ph.D in Mathematics from University of Bordeaux (France) in 1986. He has been research director
at Istituto per le Applicazioni del Calcolo "Mauro Picone"of the Italian National Research Council from 1999 to 2014, after being Associate
Professor at University of Rome "La Sapienza" (1998-1999) and researcher in the same institute (1988-1998). His research themes
include: fluid dynamics, road traffic, semiconductors, chemical damage of monuments, biomathematics. He is in the Board of the Italian
Society of Industrial and Applied Mathematics and he is Chair of the Committee for Raising Public Awareness of the European Mathematical Society (2015-2018).